Sites visible on smartphone, not on different devices

I don’t suppose this has to do with Sparkle so I hesitate to ask this but… just to be sure:

All my sites are working okay on my iPhone, but on all other devices I get - after a long long long pause - the message that the site couldn’t be opened because the server didn’t respond.

But… if the server didn’t respond, how can I then see the site on my iPhone? It really works there, refreshes etc. I don’t understand that at all, so… could there be a Sparkle angle, as Sparkle works device related?

When I try to upload a site again Sparkle tells me the FTP server is incorrect or blocked. But yesterday everything worked fine and the provider seems to have no issues…

Any thoughts? (Of course I opened a ticket with my provider.)

The only issue that could be Sparkle-related (or on Sparkle’s side of the world) is the “FTP server incorrect or blocked” message.

One problem in this area is Sparkle’s autodetection of the server protocol, Sparkle connects 3-4 times in sequence to different server ports to figure out the best protocol with which to connect to the server. Some web hosts have firewalls that detect this pattern as a malware attach and block your IP address, usually for a limited amount of time (an hour to a day), and then unlock again. We have seen this but it’s pretty rare.

Another issue is macOS security features will misfire after an OS upgrade or after a software update, and block any outgoing connections from Sparkle, so from Sparkle’s point of view there is no internet. When this is the problem, restarting the Mac fixes this.

There also are other issues like network blockers (Little Snitch, Trip Mode and some anti virus software) that interfere with FTP connections, but those are manually controlled so if it suddenly started working and you didn’t expressly allow Sparkle to connect to the internet, it’s probably not the problem.

That said if the server is inaccessible because of web hosting trouble, that would also cause problems to the FTP connection, so it’s hard to say.

A full screenshot of the browser showing that message and the phone working would perhaps dispel any doubts about typos or other weirdnesses.

Thanks, Duncan. It could be the autodetection.

I tried your suggestions and now I know: it must be a problem in my home/office network, for everything works fine when I use my phone as a hotspot. Another mystery. Why would this happen, only for my OWN sites? Are they on a blacklist with my core internet provider (the webservices provider sees no problems)? Because of the autodetection when I published one site yesterday (since then almost a day has passed)? How can I prevent that in the future?
I restarted the network/modem but that is not the solution. 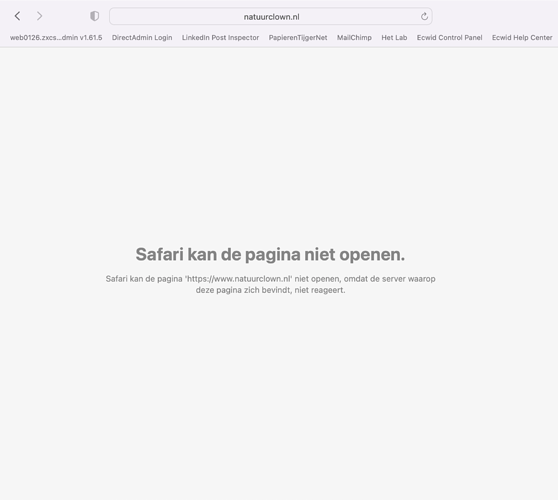 I had a similar issue recently, sparkle unrelated, also my internet was slow.
By changing the DNS server in my router it fixed the problem. Maybe you can try that and see if that’s the problem.

Maybe @Monux your IP Address is being blocked by your hosting platform?

If our client’s attempt more than 3-4 times in a row with a wrong password our system detects that as a red flag and blocks their IP Address. They can still see everything on the web, just not their website or email server on the host. Mobile (unless you use your local WiFi) doesn’t use the same IP Address so that’s the reason your mobile will see your site unhindered.

Our system allows us to unblock their IP Address and everything is good again.

@FlaminFig is proven right & my hosting platform just unblocked my IP address. To my great relief!
Cause? The auto detection issue?
I hope it won’t happen again, but at least I know where to go now. Thanks all of you for your help!