Stick-to-top menu does not work anymore

Hello,
I am editing a site that has been working well. The menu stuck to the top as designed. After changing a few elements on the site (not in the menu), the stick-to-top feature has stopped working, even though the correct settings are selected, as shown in the screenshot.
I thank you advance for your help,
Patrick 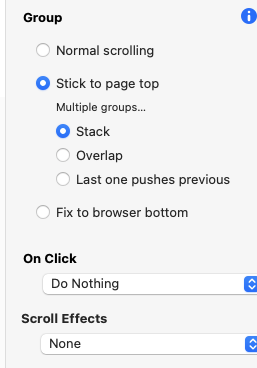 If you could send us the project file to feedback@sparkleapp.com we’ll take a look at what the issue is.

Thank you for an extremely quick and helpful response to my email! This is amazing customer support!

I have realised, when you use Block Layouts as header then it won’t stick on top and slides backwards if the content that slides up.
Maybe that’s a big, not sure.

Making a header and group it and don’t put it in a layout block works as usual.

Same issue here, I made a group but it won’t stick on top as soon as a block layout appears…
Any hint @duncan ?

I think this has been mentioned in other threads as well, but for the time being it’s best to move the elements that need to stick to top in a group.

While it was initially intended to work for layout blocks, we underestimated the change (internal structure issues), so the full fix that allows for layout blocks to be positioned at a depth that’s independent from the layer order will be available in a later Sparkle version.

Thank you for the quick reply, I appreciate it. I did try to move the elements out of the layout block and group them together but then the group is hidden behind the different layout blocks… I suppose I’ll wait for an update fix. Thank you anyway for the great help!

I suppose I’ll wait for an update fix

You don’t have to wait for a fix. But a fix is highly appreciated.

Just move the group you want to have as a sticky header to the very top of the layers.
(1) drag it in the layers panel to the top
(2) or mark it and select in the arrange panel “front”

What you describe is a (unwanted) side effect of Layout Blocks.