Hi,
since upgrading to Sparkle 3, and experimenting with Pop-Ups, I’m having issues with text not wrapping around picture boxes properly. It seems that the wrap works correctly on 1 side of the box, but not on the opposite side.
Or on other picture boxes, it doesn’t have any effect at all… whereas in the previous version of Sparkle, before I tried to add Pop-Ups, this was working as expected.
This is happening on the canvas within Sparkle, and in preview.
Turning text wrap on and off - to test the feature - makes no difference.
Also, although the ‘normal’ Pop-Ups initially previewed correctly, now they are ‘frozen’ - in that the scrolling function of the text box (for overflow text) inside the pop-up no longer works, and the ‘close’ Pop-Up button has ceased to work too…

Could this have something to do with Layers? Or Pop-Up Group ID?
I’m only opening 1 x Pop-Up on the page/s at a time - so I don’t believe it does?
I tried moving things up and down the layers panel - but nothing makes any difference…
Is anyone else having similar problems since upgrading to Sparkle 3?
Thanks,
Retroh 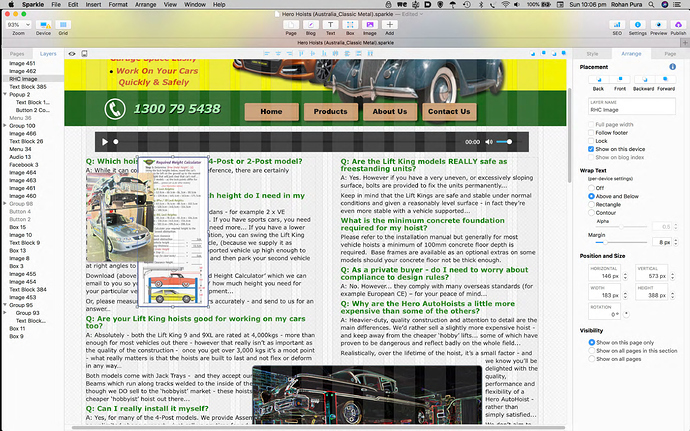 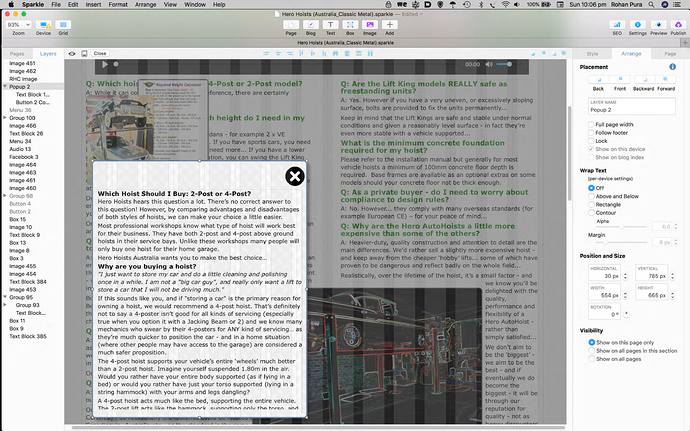 The issue with the text wrap not being honoured was due to that text block being inadvertently made ‘scrollable’… that was removed - problem gone.
The issue with Pop-Ups ‘frozen’ was fixed by unchecking ‘fixed position’ from the Popup Background/content/Built-in pattern…
Go figure… is that a bug?

Yes fixed popups are fixed… they are supposed to not move.

Hi Duncan,
thanks for getting back to me…
OK, the problem with the frozen in preview ‘normal’ Popup was resolved by unchecking ‘fixed position’ - but that only relates to the Built-in pattern option (background pattern) - doesn’t it?
Why would unchecking that cure / make the Popup function properly?
It wasn’t responding to text scrolling, and the ‘close’ checkmark was also not responding.
I feel that a tutorial demonstrating the 3 Popup styles and WHEN to use them would be very helpful…
and the other thing that would be VERY helpful (especially to users who are new to e-commerce), would be a tutorial / video demonstrating how to use a ‘Buy Now’ ECWID button that linked to a specific product purchase page - not to an online shop that listed EVERY product…
That’s something that is really stopping me progressing with the on-line shop feature…
Ie
I don’t want a page that shows every product in my catalogue - just a page that is linked to that ‘Buy Now’ ECWID button (for a secfific product) - is that possible?
I know u r flat-chat, but maybe a video showing the 2 possible options?
Thx,
Rohan
(Sydney, Australia)

A fixed popup will be fixed in the browser window. We do need to improve the documentation for sure. The popup has many setups and modes, can be hard to figure out which one you want.

The ecwid buy button is what you are looking for, but yes we will make specific tutorials and videos.