This app is impossible. Amazing. Witchcraft

Impossible I say. Witchcraft I say.

The editor, in effect, is an “absolute positioning” editor…

But the code the editor creates, has no inline styles, and is simply:

I can create an element in the editor, and drag it anywhere on the screen. I can do that, fast, easily, and with the fewest amount of clicks—simply because the editor I’m doing all that in, is “some kind” of absolute positioning editor. And yet!..

The code that the “absolute positioning” editor creates, is crystal-freaking clean code!

I could go on and on.

I have no idea how this app works. I didn’t think what this app does—so darned well—was possible.

All I know is the existence of this app is a web development engineering marvel.

Am I the only one who’s noticed this? Is there a catch or something?

Yes @robert, The Sparkle Team know what they are doing and the detail, well your living proof of it!

Not only is the code clean, but the Sparkle platform is secure and local which has a lot going for it.
I’m a Web Designer and I have used a lot of platforms out there and I can say, from experience, Sparkle is that “quiet achiever” that puts the “big boys” to shame!

Sparkle is that “quiet achiever” that puts the “big boys” to shame!

I’m a Web Designer and I have used a lot of platforms out there.

This makes me wonder how you actually use the app and, how it fits in your workflow.

Do you use it for clients?

I ask, because the only weakness I can see, is getting exported code back into the app, exactly as it was—once it’s out. At least, I think that’s the case.

Anyways, I’m really interested in how you use it.

You sound as exited as I was when I discovered Sparkle.

Entranced rather than exited.

the only weakness I can see, is getting exported code back into the app, exactly as it was—once it’s out

Hi @robert, Sparkle is not based on code internally, so it can’t import existing code as is. In the most general sense that’s in fact an impossible problem to solve, in practical terms Sparkle has the page importer but it probably wouldn’t import what you want to add.

It’s possibly more useful to talk about what features you would want in Sparkle, which we can then implement visually for all Sparkle users.

It’s possibly more useful to talk about what features you would want in Sparkle, which we can then implement visually for all Sparkle users.

I probably should have also said, *
“Sparkle already does 100% of what I need it to do. And, because of how Sparkle does that 100%, I can complete everything 3 to 4 times faster than if I were using another app.”*

I should have said that. It’s the truth dude!

That being said, I’m probably not the best “feature-requester”. :-). I use Sparkle in an unusual use-case: to to rapidly rebuild old ads—from raster pngs & jpgs, into responsive html & css, in my spare time.

So, the kind of stuff I’d want, most likely others wouldn’t.

That being said!.. Here’s one! I’d like the ability the ability to set a custom class on a native element—in a box, text-box, image, etc. Like this: 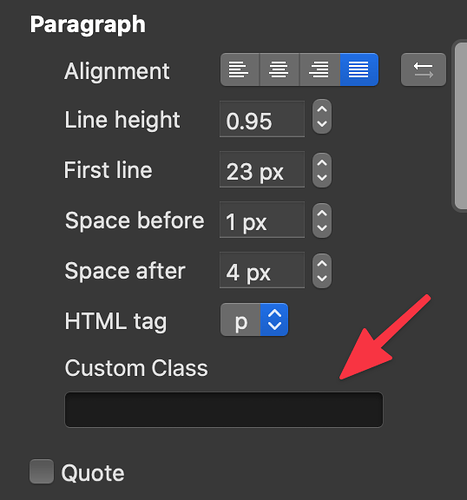 …which we can then implement visually for all Sparkle users.

I now know why I like your app so much. You’re pushing all my “I-see-a-great-product-with-mass-market-potential” buttons. The biggest being, it’s an objectively great product.

Ads that pull in record sales, pull in those record sales, simply because the product the ad is selling, is an objectively great product.

Great products, are great, because they solve one problem, in one, easy way—really well. I.E. they’re focused—heavily.

Sparkle solves one problem, in one way, and does it really well. It lets me:

Keyword: “visually”. That’s the x-factor. Everything else is built around that. That’s where all the unique quirks come from. That’s why I like it.

You’re the reason behind the visual" part.

Thanks for keeping your app so focused.

That’s exactly why I got on this program early! Bravo @duncan and Sparkle team.

We intentionally hid that because it shouldn’t be a concern for who’s thinking visually. So you can go to the Misc site settings, and enable the “Allow HTML Element id customization”.

The customizable id appears at the bottom of the arrange inspector.

@robert, Yes I do use Sparkle for my clients in regards to building out fast mockups which then builds out into the actual website.

As Duncan mentioned, Sparkle converts and exports html5/CSS3/javascript everytime you ask Sparkle to Publish your website to your hosting server. So its canvas allows free flow design and then does the work to turn it into a working semantic website - pretty cool!

For me it brings back creativity to the web, and for my clients I offer a sound secure and fast loading online presence that they are proud of!