In my topline I have a menu that opens perfectly and is quite long, as there are many pages. In Preview (in the image on the right) everything looks fine, but online (in Firefox and in Safari) the Menu lines are transparent.
Is there anything I can do? Is it a bug? The Menu is arranged as Front. 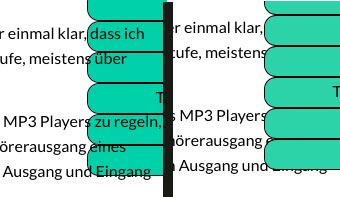 Is there anything I can do?

Yes. Please provide a link to the live page, that other users can have a look.
When the preview does not match a live page, it could be a bug. I would send the project to feedback@sparkleapp.com (maybe over WeTransfer) with a detailed description of the error.

Thanks F. Trying to find out more myself, I realized that it only happens on one page (out of 30 and growing), but checking everything (?) and comparing with other pages, i didn’t find out more.
I took several attempts with front & back (incl. to front and to back), resaved and republished - with no success. But as it is only on this page, I might try to erase it and create it again from scratch.
Thanks for your reply!
(Some time later)
I think I found the problem (and could solve it): The text part of the article was followed by a picture, which slightly overlapped the text window (but not giving me any hint, usually a red frame, I think). After I moved everything down a little bit so that none of the work areas (I don’t remember/know the correct expression for them) overlapped, the transparency of the menu disappeared.