I recently upgraded to Pro and Developer tools via the app.
So the version I had (3.1.1 8499) was upgraded to Pro - OK.
Then T discovered a file, Sparkle.zip, in my downloads folder which when unzipped produced Sparkle 3.1.1 (8500). When I run it, it assumes it’s unlicensed and requests the license code. If I “check for updates” it says it’s up to date.
When I run version 8499 there is no “check for updates” and the license window only offers “restore”. If I go to App Store and click Open for Sparkle it opens the old version 8499.
So,
a) how do I update the licensed 8499 version, or
b) license the 8500 version? 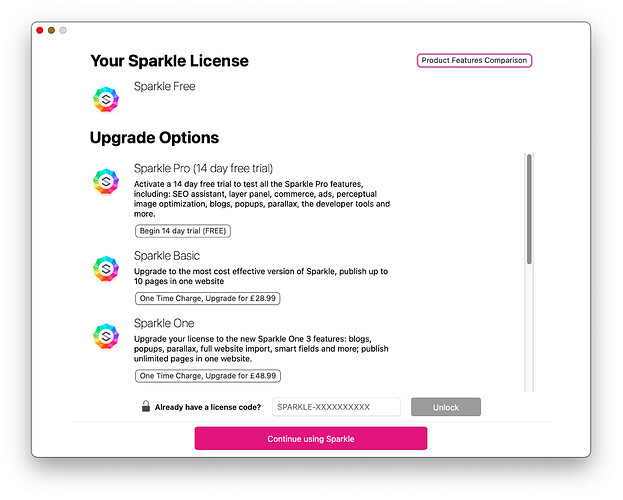 Your screenshots suggest you have purchased from the AppStore, so that’s the version you need to use.

8499 and 8500 are the same 3.1.1 version, 8499 being the AppStore and 8500 being the version from our website. They’re identical, and it doesn’t make sense to want to update from one to the other because it wouldn’t work (different incompatible licensing models).

Thanks so much for your rapid reply and explanation. I shall now bin the 8500 version so there’s no problem in the future.